Now in its 6th Edition the Cromarty Stage Race is a firm favourite with Scottish Roadies. Laura reports on how it went.

Prologue (4.2miles) – The wind blows you from Jemimaville

Neutralising riders by banning TT bikes this year did not seem to slow the times any! A strong westerly at the riders back meant that the times were rapid with the winner, John Archibald of Pro Vision Cycling, averaged 34.5 mph over the 4.2 mile course. His team mate posted the second fasted time at 9 seconds back and the newly crowned Scottish Vet Road Race Champion, Andrew Bruce of Kinross CC, posted 3rd at 10 seconds. The ever smiling Andrew told me his secret but seeing the photos now I realise they were all riding ‘Peter Sagan’ style with forearms resting on the handlebars. Top Junior was Stephen Dent of Spokes RT at 39 seconds which was impressive on junior gearing.

Turning into the headwind to start the stage a bunch of 62 riders hit it from the off and the attacks came as soon as the flag was dropped. A break was established within the first 5 miles consisting of Grant Martin (Spokes RT), Alastair McNicol (Dooleys RT) and Wilson Renwick (Parentini Test Team). Along the flat coast road Daniel Nieto (TBW Team Bottechia) and Matthew Cartlidge (Kuota-Spinergy-GSG) bridged and they had 56 seconds at one point but already down to 35 seconds as they swung left up the first climb of the day. Not too steep but long enough to hurt, Mount Eagle is a favourite rounds these parts!

With no Pro Vision Cycling riders in the break it was no surprise when the yellow jersey set a blistering pace up the climb. The bunch split into pieces and the break was swallowed up as they descended to the Killen Straights. With a tail wind this 2 mile section was the place to get away and so they did. Yellow jersey, his team mate Dave Griffiths and 4th placed Wilson Renwick made an elite breakaway and made sure they kept their advantage up the short climb of Mount High to start Lap 2 with an increasing lead on the depleted peleton.

As riders struggled, and failed, to get back into the bunch and created their own groups for the day the peleton continued riding in anger but the breakaway increased their gap. The peleton kept the gap at 1 minute for most of the lap and a brave attack by Matthew Cartlidge the last time up Mount High saw him chase to mid-way but get swallowed up in the last 3km. As they left the circuit back onto the coast road into Cromarty and onto the last 5 mile straight with a tailwind, the break started to increase their lead. We already know that these 3 on their own can hold over 34 mph on this straight and if anything the wind was stronger now. They increased their lead to 1 minute 38 seconds by the finish line.

It was a close run thing for the three with Provision’s David Griffiths sneaking the Stage win closely followed by the yellow jersey of John Archibald. Wilson Renwick was awarded the Cromarty Brewery Combativity Award, with no intention to get him drunk and sabotage tomorrow’s tough hilly stage!

Andrew Bruce took the bunch kick with last year’s prologue winner Noel Baxter of host club Moray Firth Cycling Club doing it for the locals hot on his heels! Andrew would take the Vet, Stephen Dent holding on to top spot for Junior and after an attacking race Daniel Nieto was sitting in first U23.
It was noted that a 3rd cat rider couldn’t be seen until 21st spot and credit to Scott Wardlaw of Veloclub Edinburgh in what was clearly a classy field of 2nd cat riders.  [note – Scott is a 2nd Cat, the highest placed 3rd Cat was Junior Finn Crockett of BWCC in 26th]

Today the morning was calmer, the promised rain held off but the bodies looked tired! 52 riders started as we rolled out of Cromarty once again and the views were pretty though the clouds had a threat of darkness. The roll out was hectic and by the time the riders were at the bottom of Mount High (the hard side!) there was a break of 5 with 56 seconds containing last year’s race winner Jason Roberts of Pro Vision Cycling.

As expected John Archibald in his yellow jersey (he’s got a wee collection going now!) attacked as soon as the hill went upwards. The peleton went to tiny pieces, riders everywhere. It looked to be hurting!

In the service car we were over the descent and up the drag back to Cromarty before we reached any semblance of a peleton and there was little more than 20 riders, the break within them and groups of 5s and 6s chasing hard to make sure their day wasn’t over within 11 miles. We’d left Cromarty again before a group of 15 riders caught back on to swell the peleton to around 35. But a break had already formed up the front containing the same riders as the earlier and short lived break. Jason Roberts (Pro Vision), Neil Kemp (Glasgow Nightingale), Alastair McNicol (Dooleys RT), Mark Walker (Deeside Thistle) and Grant Martin (Spokes RT) had 42 seconds.

And by the time they went for Mount High the second time they’d increased their lead to 1 min 50 seconds. This race finishes at the top of Mount High so knowing who was strong up here was key. As the yellow jersey put the pace on again the gap shortened to 1 min 25 seconds and by the top an elite group of John Archibald, Wilson Renwick, Walter Hamilton (Veloclub Edinburgh) and Daniel Nieto had attacked to bridge over to the break.

Leaving Cromarty on Lap 3 the bridge was made and the break now 9 strong started to gain advantage again.

Another time up Mount High saw a few riders dropped from the peleton and the break cemented their lead to over 2 minutes. Time was running out for the peleton to react and Ross Mallen (Royal Air Force CA) and Matthew Cartlidge (Kuota-Spinergy-GSG) attacked. They didn’t manage to bridge but they were gaining time and they caught one rider dropped form the break. Mark Walker of Deeside Thistle, who had a great ride up the road all day after finishing 8 minutes down on Stage 2.

The winner would come from this break. The GC was still under threat. Could Wilson Renwick take time out of John Archibald on this finishing climb?
Grant Martin attacked. John Archibald attacked. The group split. Daniel Nieto followed. This climb goes on.

Grant Martin of Spokes RT got it by a second! With John Archiblad in his yellow jersey 2nd and Daniel Nieto close behind. The remains of the break were all in within a minute. The chasers came in at 1:50 for Matthew Cartlidge and 2:34 for Ross Mallen and then the peleton at around 3 minutes. What a day! The rain started now and that was okay apart from the ride back to base but you could almost smell the sausage rolls and cakes and there were plenty of stories to tell! 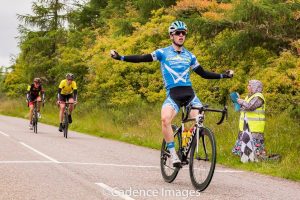 John Archibald extended his yellow jersey collection from Wilson Renwick by 31 seconds with Daniel Nieto in 3rd and Stage 3 winner Grant Martin jumping up the GC to come in 4th and first Junior by a good margin.

MFCC would like to thank, Scottish Cycling, KLM Partnership and Cromarty Brewing for there support and sponsorship.  We’d also like to thank all the marshalls and crew for their hard work behind the scenes. See you next year!

A wee reminder about the MFCC Reliability Ride organised for Sunday 27th, starting at Muir of Ord with the route around the Black Isle. Would be great to see riders from around the Highlands joining the event. britishcycling.org.uk/events/details…

A quick reminder that for anyone interested in taking part in Saturday's club ride to please fill in the google form. This helps organisers know who is coming along & to sort out groups! Please complete before 1800hrs on Friday. Thanks! docs.google.com/forms/d/e/1FAI…

With the forecasted weather for Saturday, probably best sticking to the Strathpeffer route for the club ride. A wee reminder for folk to register prior to the ride & ideally before 1800hrs tomorrow to help organisers. docs.google.com/forms/d/e/1FAI…